Deetz, our alpha gelding, met me at the paddock gate, eager to come out. Between the cold of January and the crazy amount of rain we’ve been getting, grass is scarce, and mud abundant. He was humming with desire to find something green and growing, so we threaded our way behind the covered arena to a low traffic area where a few weeds and patches of clover push their way through the thick clay.

We have a little ritual that I like to use when grazing horses. We stop. I wait for Deetz to check in with me, and then put my hand down on the grass, as he follows with his muzzle. It’s been a win/win, as it takes the frantic out of the conversation.

With so many people handling the horses here, at the non-profit where I work, the horse knows they can ask for what they’d like, and will be heard, and the person can lose the death grip on the horse’s head, and treat them like a partner; thus grazing becomes shared time between the kids we serve and the horses.

We work with kids in crisis, pairing them with a rescued horse and a mentor. Many of the folks mentoring these precious kids, are volunteers. As our equine manager and the one in charge of training both horses and the people who handle them, it’s been an interesting challenge to find a language that is simple enough for a non horse person to learn, and still honors the horse, so that they feel safe and confident to reach out and connect with hurting kids. So, this is one of those little things that has taken the struggle out of grazing.

Deetz seeks out the few remaining greens, hearty weeds that he wouldn’t notice in summer, and clips them to the ground with precise teeth. With everything living eaten, we turn to the arena.

I’d heard that he was not happy about grooming last week (always a potential sign of pain, often ulcers), though with Deetz, he’s both particular about who touches him, and how he’s touched. He’s also ticklish.

Here, in our winter season, my focus is on helping the horses regain trust and comfort in the work they do. Because most of them come with a checkerd past, it can be easy to break that trust, and takes time and consistency to earn it back.

When I first met Deetz, almost six years ago, he was done with people. A smart, confident horse in most ways, and the uncontested alpha in the gelding herd, he didn’t hesitate to let his opinions be known.

Slowly, his curiosity woke up. He began meeting us as we came with his halter, to the paddock. He’s a smart boy, so it didn’t take long for the conversations to get interesting.

I figure it would be rude to come up to a person in the middle of something and just interrupt with my ideas. So why would I do that with a horse?

This past year, Deetz and I began having conversations about riding. Ones that he was interested in. He let me know just how unconfident he was, and I let him know we would go at his pace. By fall he was offering softness back to me, just at the walk, with a bareback pad and halter tied around for a makeshift, and mostly unused, bridle. He’s only used for leadline riding at a walk with the kids, so my hope was to help him find his confidence riding together, so that it would be easier to accept a child on his back while someone led him.

And… we live in a real world, so in his line of work, that confidence he’d found eroded. It eroded to the place where he was unhappy about grooming again, picking up his hind leg and offering to kick. He was backing away from the mounting block, or swinging away from it when it came time for a child to ride, as he felt like he needed to defend himself and his space again.

I don’t know about you, but I don’t experience relationships as static. They’re dynamic, fluid, and the best ones make it a priority to heal the breaches that happen as a part of life, rebuilding trust as they go, and growing their roots deeper. I believe that it’s the same for our relationships with horses. Unlike people though, they’re more willing to let us know when they’re not feeling safe or heard with us. That’s not a gift I want to ignore.

So, life happens. Things trigger old hurts. And we can choose how we respond. It was time to respond to Deetz.

I left my agenda at the gate, as it wasn’t going to help either of us, and Deetz can sniff it out a mile away. He entered with energy, usually a sign of insecurity for him, so I let him lead me around. We explored the leaves blown in, the pee spots from the ponies turned out there at night, and the tiny fox prints that always peppered the far corner of the arena. He spotted two mares grazing in an adjoining field, and watched his herd eating hay in their paddock.

His head came down. His eye softened. Slowly he tuned in to me. I asked to walk together, and he partnered easily. We walked, backed, circled; a quiet connection, feeling sweet.

He had caked himself head to toe in mud, thick and crusted now, and I shook my head, thinking this isn’t what I would have set up for our first foray back into grooming, but it’s what we had.

His eye hardened as I picked up the pliable curry. We started at his withers, as that’s usually his best touch spot. Just laying the curry on his back brought brace. A hind leg came up, and he held it high and forward, like a still shot for a cow kick. This was conversation, not reactiveness.

I moved back until he softened, then came in slower. No leg, but a back up. I followed, and as he stopped, I pulled my hand back.

He softened. I asked again, moving the curry to his withers. Again a back up. I followed again, letting him move without constraint, and pulling away as soon as he stopped.

Another big yawn. His head dropped, and eye relaxed.

I placed my hand again, and he stood softly.

I moved away, and squatted down to stretch my back. He moved over to me, and placed his chin on the top of my head, resting the weight of his own head on mine.

Deep breath from him.

Deep breath from me.

He lifted his head, I stood, and began to groom him quietly.

That was a gift, as it’s often one of the triggers for him.

We walked together, snugged the girth up a little more, and walked some more. In my head, I was wondering if I should call it now. This was a pretty big win, and it had been a long session. I like to keep things shorter, leaving the horse wanting more, rather than wanting ‘out’.

Something in me felt like he wasn’t done, so I let him choose the direction as we walked.

Deetz walked with me up to one of the three mounting blocks in the arena, and as I asked him to back, he lifted his front foot and placed it all the way up on the third step of the mounting block.

I let go of the ‘reins’ and we walked together at liberty, starting and stopping in unison. He asked me to follow him to the back of the arena. I followed, and he walked straight to another mounting block, pivoted himself around it to place it directly in line with the saddle pad, and turned to look at me.

You could have knocked me over. My own horses would come ‘pick me up’ at the mounting block or the fence, but Deetz usually avoided placing himself in a mountable position. This was a HUGE gift.

I stepped onto the bottom step. His head lowered and ears relaxed.

I moved up to the next step. No reaction.

At the top step, I placed my hands on his back, simulating the pressure of my seat, and he stayed soft, relaxed.

Gently, I swung a leg over. His head stayed low, ears forward, deep full breaths moving his ribs. We breathed together for a few moments, and then I asked him if he’d like to walk. He moved towards the center of the arena, stopping with my exhale, and I hopped off.

Well, actually, I kind of slid off, as hopping and jumping don’t work as well for me since my back surgery.

There was no nicker on the dismount (another of his anxiety signals), and he turned to me, licked and chewed, and followed me back to the rail as if nothing special at all had happened.

It’s these moments… I feel so privileged, it stops my breath. And I can sense a herd of horses from my past watching, then lowering their heads to graze. 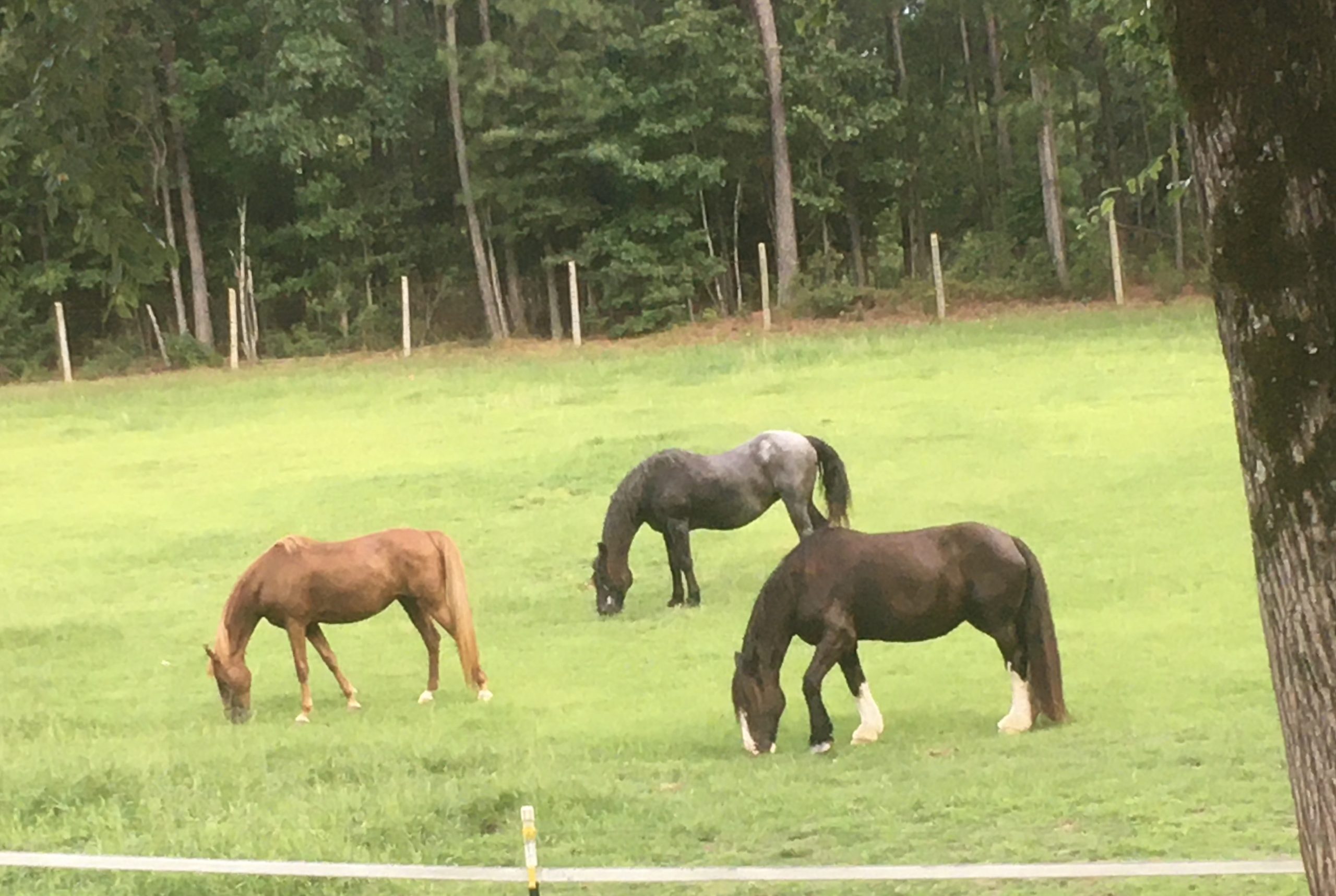 Climbing out of the winner’s circle

The large mare braced her neck in response to a gentle lift of the right rein; the softness of a moment ago evaporating, as she readied for a fight...