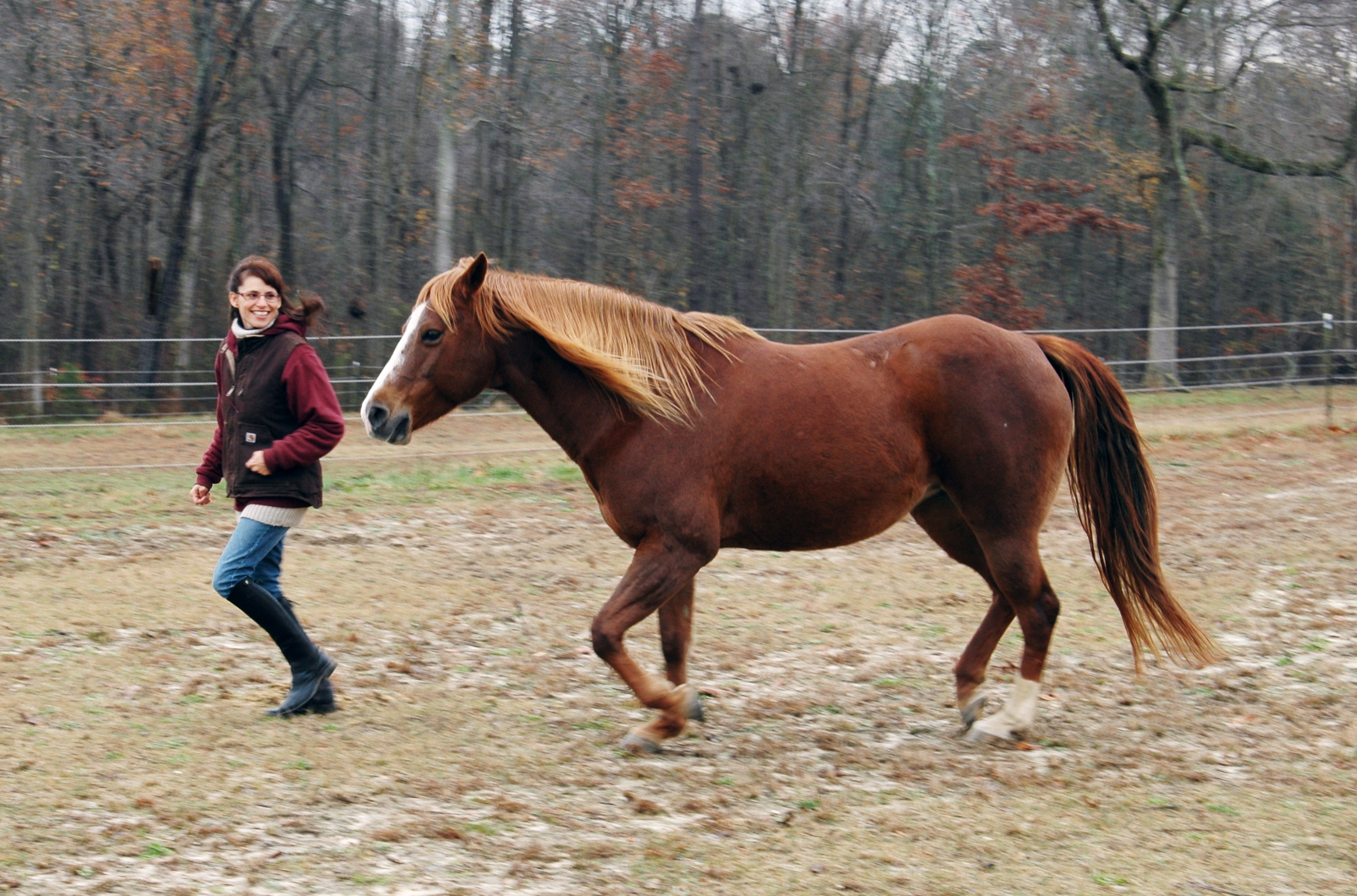 I slid the black rope halter onto Willow’s head, and felt her breathing shallow. Her eyes hardened, and the corner of her lips tightened. Not overt signs, but I’d been watching her for months, and this felt like a yell. I slid the halter off again, and turned away, not sure where to go from here.
She lowered her head, shook it and blew, and then did her modified ‘lick and chew’, where the end of her tongue stayed tucked behind her bottom teeth. It wasn’t until I walked away that her breathing returned to normal.

I was staring at a brick wall. No one I knew was having these conversations with horses, and every voice I’d ever listened to was now parading around my head, mocking me.
What kind of an idiot was I… not willing to halter my own horse, because, “she didn’t like it.” I felt my own breath let go in a sigh. I didn’t have a clue what I was doing, and the only thing I knew was that I wasn’t going back to where I’d been.

It was a good thing this was my farm, and no one was actually out here to watch me make a fool of myself.

After taking a seat on the hay manger, Willow approached me, asking for scratches. It wasn’t that she was scared of me. She just wasn’t excited about who I’d become when I put a halter on her, and I couldn’t blame her.

My fingers found the itchy places along the underside of her neck, and she stretched out her jaw appreciatively.

I had a thought. “What if I ditched the hater? What if I tried to find a way to interact with her that didn’t involve any constraints? What if I allowed her full agency in our conversations?”

My mind started whirling. I didn’t know what this would look like, but I’d just stumbled upon a door in that wall I’d been facing. We shared a quiet language at liberty that we used every day for feeding, grooming, picking feet, etc. It was soft, subtle, and felt good.

What if I started with that? And how could I make it worth her while to try this with me?

I hadn’t used treats a whole lot in working with the horses, though I was happy to treat them just because. My ‘ask’ of them was to back up before receiving a treat. That had the effect of creating a respectful space around treat time.

I had to laugh, as I thought of how Willow would canter up to me when I came out to feed them, and almost execute a sliding stop in front of me, and then arch her neck and back a few steps before extending her nose to me in a polite request for a treat. She was smart, and delightful.

As I pondered how I could engage Willow in a way that she could get excited about, I considered introducing treats into this new conversation. I knew I didn’t want to stay reliant upon them, but I needed to find a positive way to engage her.

I went to the tack room and pocketed a handful. The rustling around in the bag was enough to draw the horses to the gate. Eager eyes and pricked ears awaited me. Halley moved everyone aside as she awaited her due. I backed each horse up with a wave of my finger, dispersed the treats, and then closed the adjoining gate to the small ring. Willow, more food motivated than the rest, pressed herself against the gate, hoping for seconds. I opened the gate, separating her from the herd, and invited her in with me.

I extend my arm forward, inviting her to walk with me, and due to the treat smell in my pocket, she overcame any hesitation she had, and joined me for half a dozen steps. I stopped and she stopped with me. I backed up, and she backed up with me. This was more than I’d hoped for. I turned to face her, asked her for a few more steps back, gave her a treat, and figured I’d better stop while we were ahead.

We started to play with this daily, until she lost all hesitancy walking, turning, and backing with me. It took a few weeks for her to soften as we played, but once she did, I started taking the treats out of the conversation. I breathed a sigh of relief that they were no longer necessary. She had begun to enjoy our time.

This wasn’t just a breakthrough for her though, it was a breakthrough for me. Only once before, when my boys were little, had I turned my back on the room full of voices telling me how to be, and followed my own heart. To this day, I don’t know if it was because of what my boys needed, or what I needed, but I’ve never regretted it. I’d parented them, and re-parented myself; affirming their needs, their voice, and my love.

Now, all these years later, as I did the same for Willow, it was landing just as deeply for me. That ongoing question, “Is it okay for me to BE?” began being answered in the affirmative. Each time I said ‘yes’ to Willow, I was saying ‘yes’ to me.

It sounds easy in retrospect, but going through it, without any guarantees, or any idea where this was taking me, left me unnerved. Each time I went out and played with her, meeting her where she was, I felt like I’d scaled a mountain. The old voices were still nagging at me, but I was developing my own voice, so they weren’t the only ones talking anymore.

I did want to be able to do more than walk around together though, and wondered how I could build a bridge from where we were to where we might go together. Willow got scared when the energy came up in a conversation (both mine and hers). She had never been taught the basics of walk/trot/canter before she came to me, either on the ground or under saddle. Before I bought her, she’d been beaten to get to move at all, and her brace showed up as being sticky about moving, and then exploding.

When I first got her and had put her on a 22’ line to see how she what she’d do, I discovered that she had 2 speeds, walk and gallop. And she didn’t turn. We went grass skiing that day. After that I was able to teach her how to walk/trot/canter online, but she did it with fear and brace. That was no longer acceptable to me.

I wondered what she would do if I began ‘trotting’ next to her at liberty. Not asking her to come with me, but just suggesting it. The first few times I tried, she simply ignored me, letting me trot away. When I included a little ask with it, turning away and looking at her hindquarters, she laced her ears back and charged after me, shaking her head.

Okay… that wasn’t what I had in mind. Too loud.

So we played with this, walk, trot, walk stop, back up, and repeat. The treats came back out, and my asks got a whole lot quieter. Slowly, oh so slowly, she began to have fun. Over the next months our conversation broadened. No longer scared or defensive, she tuned in to me, even picking up a canter with me ‘cantering’ beside her, on occasion.

One morning, after feeding and mucking out, as I was leaving the paddock and preoccupied with my own thoughts, she came trotting up to me, ears forward, eyes bright, and did a full spin in front of me, stopped, arched her neck, and backed up, hoping for a treat. She offered it! She was engaging me now. We were finding our own way through, together.