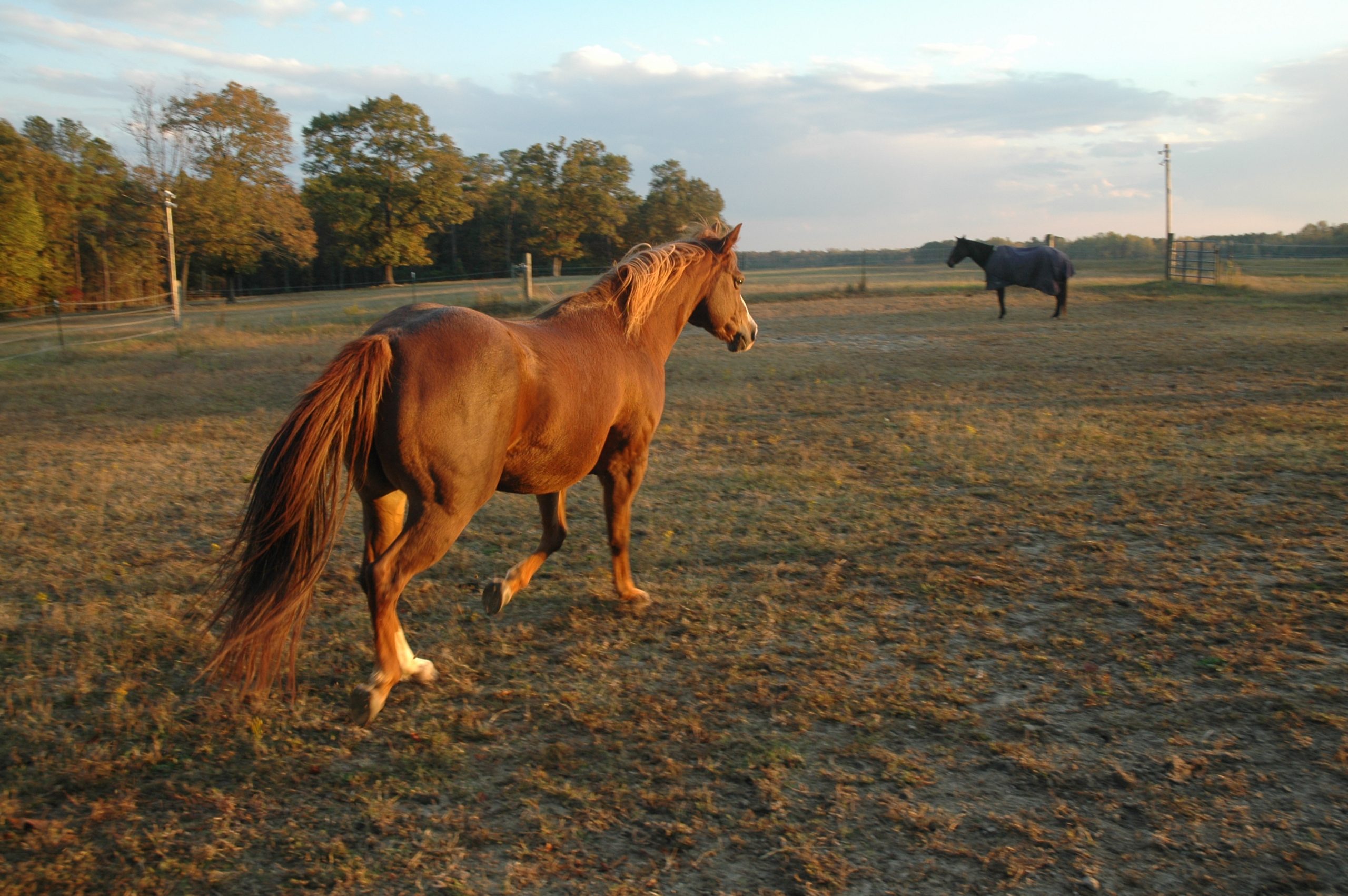 You know the characters I described in the last chapter? Yup, I’ve been each of them. How about you? There are more types, of course, but I think you get the picture.
So how do we recognize when we’re playing a part, and that there can be something else here, something more? How does our connection with horses move beyond our own projections, and into a conversation where there’s room for both parties? And how can that conversation change us?
This, for me, is where the magic happens, and not surprisingly, it begins in darkness. Ours, to be exact. Not the horses’. Let me share a story…

It was one of those early fall days, not cool enough to need a sweatshirt, but after the summer’s heat, the drop in humidity and the chill in the breeze reminded me that I enjoyed being alive. I woke with a sparkle, the sense of adventure that fall resurrects.
After morning feeding, I haltered my Arab-cross rescue mare, Willow, and walked her down to the side pasture, where I had a round pen, so I could play with her at liberty. I didn’t do as much with her as I did with my older mare, Halley, who had been my teacher on this journey of learning natural horsemanship.
When I rescued Willow, she was emaciated, shut down, and seemingly docile. Her sellers admitted that they had beaten her just to get her to go. When I tried her out, she was scared, braced, but trying to work with me. They were just surprised that I got her to trot without force.
She was living in a mud lot with a round bale that most cows wouldn’t touch, and about 8 other horses who were skin and bones, including a young stallion, who was indiscriminately breeding the mares. There was nothing she could have offered to convince me leave her there.
I loved seeing her fill out, shed her wormy coat, and grow into a glossy chestnut beauty. As her health improved, she also began waking up. Where she had been shut down before, she now became reactive, explosive, and defensive whenever anyone (including her) brought energy to the conversation.
Having originally bought her for my sons to ride (I know… not my best plan), I was rethinking it all. She had dumped my youngest son when his boot hit the ring rail, and she spooked. She would buck and spin every time I asked her for a canter, and she made it clear that she wasn’t happy with any bit of it.
So I was letting her be… just connecting daily over feeding and chores, not asking much of her, but trying to build trust.

The horses rotated between the side and back pastures, so it wasn’t beyond Willow’s comfort zone to go down there. The round pen in the pasture though, was not a place in which she’d spent much time. The pasture bordered the country road we lived on, and right across where the round pen sat, another gravel road met it, in a T. There wasn’t usually a lot of traffic, so I hadn’t given it much thought.
We started by moving around each other, and as that went well, I asked her to step out on the circle, wanting to see what she would do. She picked up a quick trot, and then a lifted truck came barreling down the gravel road, it’s straight pipes roaring. Willow took off, eyes panicked, hooves sliding on the dry grass, as she galloped as fast as the 60’ round pen would allow. It took a little while for her to come back to a trot, but now her head was facing out, away from me, her tail flagged, and her eyes were white ringed and staring.
I’m sad to admit that the first thing I thought was that she was beautiful, with her animated movement and high energy. (I had so much to learn… ) We did some more trotting and cantering, and then I asked her to come in to the center with me. She was quick with all of my asks, and so I kept her off line when I opened the round pen gate to see what she would do. Well, she leapt like a racehorse at the starting line, galloping all the way to the fence, and pacing in front of it, eyes staring for her herd mates in the paddock up the hill.

I can’t unsee that moment. It finally saw it. I stood watching her pace, her body pressed against the gate, as far away from me as she could get, and realized that I wasn’t fun for her. Hell, I wasn’t even safe for her. She would rather be anywhere else, than near me.
Here, I had been learning natural horsemanship, and getting better in my horse interactions than I had ever been, but none of that mattered to her. I wasn’t hearing her. My older mare was forgiving of my one sided conversations, and continued self absorption. Willow was not. She needed more from me.
It would be months before I worked with her again. I didn’t know what to do, and admitting this set the committee in my head howling. I was running around up there, much the same way she had been running in the round pen. And I was as unsafe for myself as I was for her. I felt like a failure. Every time I looked at Willow I felt ashamed, angry, and miserable. I could hear the accusations:
“You call yourself a horse person! You can’t even work with this little mare.”
“You were stupid enough to buy her. You don’t know anything.”
“You’re a fraud, a sham… you’re just playing at this and should give it all up.”
“You’re just making it all worse. You should sell her, or send her out for ‘real’ training.”
“You’re just afraid. If you showed her who was boss, she’d get over all this, and you’d have a horse you could use.”
“You’re babying her. If you’re not the leader, there’s no way she’s ever going to get better.”
… and on and on.

Recognizing our own dissonance, seeing it for the darkness it is, and coming to name it, is where the journey begins. I’d grown accustomed to living in my own shadows, but horses can’t ignore it. They may not be as direct as Willow in sharing their observations with us, but as we invite a two way conversation with them, they will let us know.
Here’s the catch, though. When the voices in our heads set us to running, we’re as deeply in survival mode as a horse running from us. Or the horse shut down, just trying to make us go away. We don’t do our best thinking there.
It’s real work, to come down off the edge of denial, past the rationalizations, the pride, the defensiveness, the fear, the shame… and stand quietly in our own shadows. It changes us. I believe it changes us for the better. The horses I’ve met believe that too.